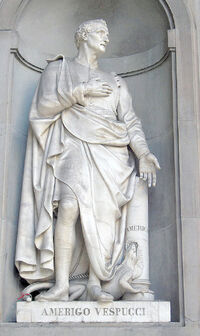 Amerigo Vespucci (c.9 March 1454-22 February 1512) was an Italian explorer, financier, navigator and cartographer. It is widely believed that the naming of the American continents was derived from the feminized Latin version of his first name. He is recognized as a Keeper of the Journal.

While participating in his second voyage to the continent now known as South America, Vespucci would encounter an indigenous tribe of people believed to have formally been Mayans. Upon seeing that he understood the written language, the people gave Vespucci a book that was in their possession. Vespucci believed he was receiving a gift, but was however unable to understand the foreign language written within the book.

Upon returning to Europe in 1500, Vespucci met up with an old friend in Leonardo da Vinci, who he had known back in the 1460's and 1470's. Believing he more than any one could decipher the foreign language, Vespucci gave da Vinci the book known as the Shepherd's Journal to study. It is not known whether da Vinci made Vespucci aware of his discoveries. However, Vespucci expressed great displeasure when Cesare Borgia confiscated the book on behalf of the Spanish government in 1502.

Retrieved from "https://atlantisthelostempire.fandom.com/wiki/Amerigo_Vespucci?oldid=5159"
Community content is available under CC-BY-SA unless otherwise noted.