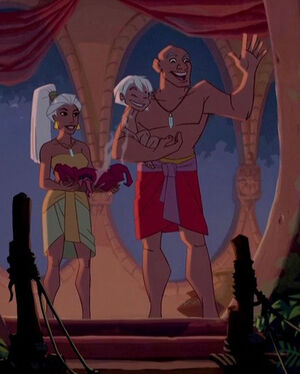 Atlanteans are a race of advanced human beings who founded the fabled empire of Atlantis. Their history dates back at least one hundred thousand years; they can live to great ages (thanks to the crystals they each one carries) that may seem inhuman to outsiders, with the oldest known Atlantean being the former King, Kashekim Nedakh. At the height of their power, Atlantis was known across the world and referenced by philosophers such as Plato; however, they have since fallen and are usually thought to be a myth by most people.

The Atlanteans have brown skin, white hair, full lips and blue eyes. Most of the tunics, robes, and garments are worn by the Atlanteans are blue, with some gold and orange colors interwoven. Every Atlantean wears a piece of the heart of atlantis as a pendant attached to a thin cord that they wear around their necks as a necklace. Warriors and Important people have blue tattoos with unique intricate designs mainly on their faces but sometimes on their arms and shoulders in Milo's case after he became part of the civilization at the end of the first movie. The tattoos are a mark of status. When Kida became queen she received more markings on her face in addition to the ones she already had.

The culture appears to have stressed the importance of water; there are many flowing waterways located in their great city and even their language (which also appears to be important in Atlantean society) is modeled after the flowing form of water. The loss of the ability to read was a huge blow to the Atlantean culture, it crippled their ability to use their flying machines and their once-powerful technology. When Milo Thatch reintroduced the ability, Atlantean society had begun to rise once more.

Each Atlantean gains a small, blue crystal, which they use to power the technology they frequently use. It can also be used to heal small wounds, as seen when Princess Kida heals Milo's cut chest. All of these crystals are smaller parts of the Atlantean's Great Power Source: a Giant Crystal that shines bright blue and can only be touched by those of Royal Blood. Because Atlantis cannot function without it, it has been called the Heart of Atlantis.

The Crystal may choose a host of Royal Blood when Atlantis is in great peril. However, if the crystal is removed, the Atlanteans lose their power and will eventually die. The King's crystal piece appears to have some sort of value and importance amongst the Atlanteans, as King Kashekim passes on the crystal to Milo Thatch as he dies.

The Royalty among the Atlanteans is regarded highly, for example, no one seemed to question King Kashekim's decision to keep Atlantis submerged except his own daughter. For many thousands of years, they accepted his decision even when their culture was dying. Royalty is also highly important amongst the Atlanteans because the only ones who can properly fuse with their Power Source are the ones of Royal Blood. Should anyone else attempt this, they will be crystallized, which is extremely painful and possibly fatal.

When a King dies, the Atlanteans carve his face into a great stone, and their child lights it up with their crystal. The stone then flies up and circles the Power Source.

The technology of the Atlanteans was highly advanced; it could easily outdo a combustion engine. The Atlanteans also mastered the power of flight millennia before the rest of humanity did. They could create great machines with their skills, an example being the Leviathan. How the Atlanteans gained such advanced technology is not not known or elaboratoried upon.

Retrieved from "https://atlantisthelostempire.fandom.com/wiki/Atlanteans?oldid=7159"
Community content is available under CC-BY-SA unless otherwise noted.