Audrey Rocio Ramirez is a character in Atlantis: The Lost Empire who serves as chief mechanic of the expedition to find the lost continent of Atlantis. She would reappear in the direct-to-video sequel Atlantis: Milo's Return.

Began working in her father's Automobile Repair Shop as a mechanic's assistant in 1901 at age 5. Showed an early aptitude for mechanical engines; was promoted to full apprentice at age 7.

The daughter of Master Mechanic Manuel Ramirez (retired from Whitmore Industries), Audrey Rocio displayed remarkable mechanical acuity from the time she could first walk. At the age of 18 months, she could completely disassemble and reassemble any clock in the Ramirez household. At the age of 3, Ana Ramirez found that young Audrey was able to foil any lock she encountered. Mrs. Ramirez despaired of trying to keep sweets in the house, as it became plain that no matter how complex or expensive the pantry lock was, Audrey could best it within minutes.

Although nearly as aggressive as her older sister Nena, Audrey was drawn to the calm of her father's workshop. At the age of 4, Audrey rebuilt a '96 Quadracycle Runabout and it became clear to Manuel that his daughter had what he called "The Touch." Although he could never tell his paying customers that a toddler was repairing their automobiles, Manuel took on his daughter as an apprentice.

In 1905, the Ramirez family moved to Detroit, where both father and daughter took night jobs at the Henry Ford Automotive Plant to supplement the income of Manuel's shop. Audrey blossomed in the giant, well-appointed machine shop at Ford. She began a period of research and invention, where she specialized in gear drives and hydraulics. Her aggressive nature eventually put her in the forefront of the new Automotive Labor Movement.

Henry Ford, being a reasonable man, learned early on to take Audrey Ramirez seriously. The Ford Motor Plant is now recognized as one of the most enlightened and well-paying manufacturers in the Automobile Industry. Manuel Ramirez, upon his retirement, stated that despite his relationship to his daughter, he has never met a more gifted mechanic to replace him. Currently on retainer.

Her father Manuel retires after participating in the expedition that locates the Shepherd's Journal in Iceland. She replaces him going into the expedition to Atlantis and is later talked into agreeing to locate a giant crystal pictured in the book and sell it on the black market for a hefty price.

As chief mechanic, Audrey does whatever she can to keep the Ulysses running during its attack by the Leviathan. Despite her best efforts, even doing some of the job herself, she recognizes that all is lost and reports it to Commander Lyle Rourke, who in turn orders all hands to abandon ship.

Throughout the journey to Atlantis, Audrey and whatever remaining mechanics are available check to make sure all the vehicles are in working condition. When The Driller appears to have a busted rotor, she is about to take a replacement piece from one of the spare trucks when Milo Thatch uses his skills working in the boiler to get it working again. Audrey does not necessarily take this well, punching Milo twice in the arm for flinching, but it eventually leads to her and the others to taking him in during a rest break.

Having never met the man her father knew, Audrey gets Milo to talk about his grandfather Thaddeus Thatch and appears to enjoy seeing Milo open up. Audrey in turn talks about herself, how she hopes to open a new high end repair shop with her father with the money she expects to get from the expedition, and that her sister is an undefeated boxer with a shot at the title.

When the expedition gets dropped into a cavern as a result of escaping hostile fireflies, Audrey notes that only a couple of trucks were totaled while the rest, including The Digger, made it managed to stay in working condition due to apparently landing on soft soil, later identified by Gaetan Moliére as pumice ash from the dormant volcano. Audrey is in awe of the beauty of Atlantis and is later seen with Cookie Farnsworth exploring the marketplace. Here, she comments on the Atlanteans tattoos, only to be horrified when Cookie displays his of the United States of America on his stomach.

Audrey and the others stick with Lyle Rourke as he executes the primary objective in fiddling the giant crystal, although she is among those shocked by his actions at striking the already dying Atlantean King Kashekim Nedakh. After the Heart of Atlantis is recovered, Milo makes a plea to the others regarding what their actions will do, making Audrey feel guilty about opening a repair shop with her father from the money received at the expense of the lives of the Atlanteans. Audrey is among the first to side with Milo and later participates in the battle to stop Rourke.

Audrey shares a flying stone fish vehicle with Joshua Sweet and the two attempt to free the container holding Princess Kidagakash and the Heart of Atlantis from the escaping hot air balloon while Milo and Vinny Santorini act as decoys, but Rourke and Helga Sinclair manage to shoo them off dropping bombs around them. Fortunately, Milo would bring about Rourke's defeat and the rescuing of Kida, the Heart of Atlantis, and Atlantis itself.

Audrey is honored for her bravery in saving Atlantis, giving Milo a goodbye kiss on the cheek and two playful punches to the arm for flinching. Upon returning to the surface, she would outfit her crystal as the center attachment to her botch. Whereas she is often seen as a tomboy throughout the expedition, she wears elegant clothing of a lady during her debriefing with Preston Whitmore. She presumably goes through with opening up a repair shop with her father from the money earned through the gold received from the Atlanteans.

Audrey would join the others in returning to Atlantis briefly in informing Milo and Queen Kidagakash of what is happening on the surface.

The development of Audrey was a desire by the filmmakers to create a female character closer to Milo's age he could seemingly relate to. Furthermore, writer Tab Murphy noted that directors Gary Trousdale and Kirk Wise felt there needed to be a mechanic, believing that there had to be someone to tend to the vehicles. This inspired Murphy to come up with a teenage female grease-monkey with a tough girl attitude one would find in Latin American women from the Bronx.

The supervising animator of Audrey was Anne Marie Bardwell, who also served as a character designer on the film. Bardwell noted that much of Audrey's personality and attitude comes from her either objecting to or being oblivious to the standards of pre-World War I as there were hardly mechanics, never mind female mechanics, never mind teenage female mechanics. Animator John Pomeroy, who Bardwell previously worked under at Sullivan Bluth Studios, believes Audrey is very much like Bardwell herself in that she is feisty, spunky, and full of verb.

Jacqueline Obradors provided the voice for Audrey. Obradors imagined Audrey as being a tomboy who was in touch with her masculine side. She enjoyed the process of recording dialogue for a character, making her feel like a kid again and wanting to keep going even though the two hour sessions scheduled would end. 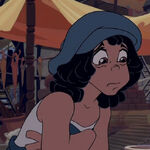 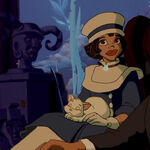 Retrieved from "https://atlantisthelostempire.fandom.com/wiki/Audrey_Ramirez?oldid=7099"
Community content is available under CC-BY-SA unless otherwise noted.