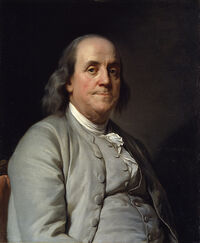 Benjamin Franklin (c.17 January 1706-17 April 1790) was one of the Founding Fathers of the United States of America. Franklin was a noted polymath, a leading author, printer, political theorist, politician, postmaster, scientist, musician, inventor, satirist, civic activist, statesman, and diplomat. He was also a major figure in the American Enlightenment and the history of physics for his discoveries and theories regarding electricity. He is recognized as a Keeper of the Journal.

As Franklin was finishing up in autobiography in 1788, he made note that he got an opportunity to study the Shepherd's Journal. He added that it was being held at the Palace of Versailles, where King Louis XVI and his wife Marie Antoinette lived. There has been some debate as to whether he studied the Journal in 1788 or mentioned in 1788 that he studied it largely due to his still being President of the Supreme Executive Council of Pennsylvania until November 5, 1788. He may have studied the Journal during his time as Ambassador to France from 1776-1785.

It is believed that Franklin ultimately did not make public of his studying the Journal, recognizing that such notions have historically been met with skepticism. Further more, whatever notes he had made from his studies were apparently left in France and perished during the French Revolution.

Retrieved from "https://atlantisthelostempire.fandom.com/wiki/Benjamin_Franklin?oldid=6631"
Community content is available under CC-BY-SA unless otherwise noted.