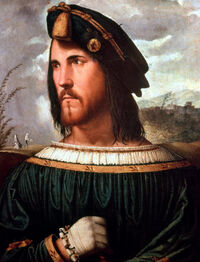 Cesare Borgia was the Duke of Valentinois. An Italian condottiero, nobleman, politician, and cardinal, he was the son of Pope Alexander VI and his mistress Vannozza dei Cattanei.

In 1502, Cesare Borgia confiscated the book known as the Shepherd's Journal from Leonardo da Vinci on behalf of the Spanish government. The official reason is believed to be that Borgia was seeking favor with Ferdinand V on the outset of the Spanish Inquisition. Another reason, though not proven, would be that it was a condition for Borgia's employment of da Vinci as military architect and engineer over the next year with an unlimited pass to inspect and direct all ongoing and planned construction in his domain. Nevertheless, his act of delivering the book to Spain was heavily frowned upon by da Vinci as well as Amerigo Vespucci, from whom da Vinci received the book.

Retrieved from "https://atlantisthelostempire.fandom.com/wiki/Cesare_Borgia?oldid=5182"
Community content is available under CC-BY-SA unless otherwise noted.