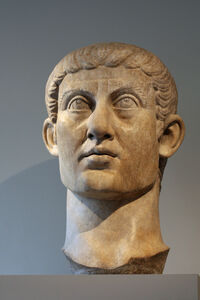 Constantine I (c.27 February 272-22 May 337), also known as Constantine the Great or Saint Constantine, was the 57th Emperor of the Roman Empire. He was the first Roman Emperor to convert to Christianity and was the central figure of the Civil Wars of the Tetrarchy (c.306-324) to crown the sole true Emperor. He is recognized as a Keeper of the Journal.

The foundation for Constantine becoming the sole true Emperor of the Roman Empire would take place during the Battle of the Milvian Bridge on 28 October 312. His armies would defeat that of Maxentius, who himself would drown in the Tiber River during the chaos of his troops fleeing. Following the end of the Civil Wars, Constantine would have the Imperial residence moved to Byzantium, renaming it Constantinople when the renovations were complete in 330.

In addition to moving the Imperial residence to Constantinople, he also had the Scrolls of Aziz moved there. He had his advisers hire the best scholars in the Empire to study and decode the Scrolls, hoping to unlock its secrets and apply them to his rule. It is believed that the deciphering of the Scrolls were not completed by the time of Constantine's passing.

Retrieved from "https://atlantisthelostempire.fandom.com/wiki/Constantine?oldid=5160"
Community content is available under CC-BY-SA unless otherwise noted.