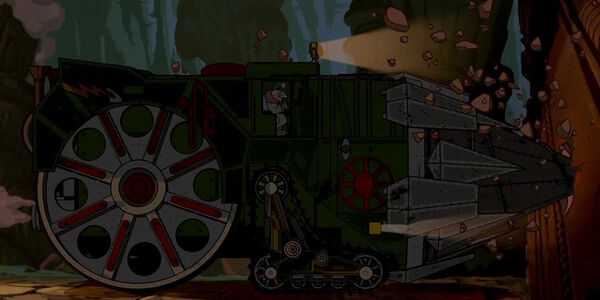 The Digger is a drilling vehicle used primarily by Gaetan Moliére to burrow into hard soil. It can also apparently drill through some forms of rock and concrete, as exemplified in Atlantis: The Lost Empire when it is used to break through an obstacle when Vinny Santorini does not have enough explosives to blow it open.

While the Digger possesses strength superior to most other drilling equipment, it can be overexerted to the point that the rotor can get shot or disabled. This generally requires a complete replacement, although Milo Thatch was able to get it running again following a few tweaks, comparing it to how he would fix a boiler at the Smithsonian.

Due to its enormous size, the Digger is left behind when the Whitmore Expedition locates Atlantis as the wooden bridge leading into the city is not wide enough. It would later be destroyed when the dormant volcano erupts.

Retrieved from "https://atlantisthelostempire.fandom.com/wiki/Digger?oldid=7066"
Community content is available under CC-BY-SA unless otherwise noted.