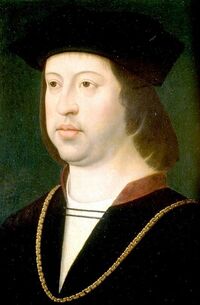 In 1502, Cesare Borgia confiscated the book known as the Shepherd's Journal from Leonardo da Vinci and handed it over to Ferdinand V in an effort to gain favor on the outset of the Spanish Inquisition. Ferdinand took no real interest in the book, believing it to be heretical. Nevertheless, he hid it away in his castle as opposed to destroying it. While never proven, it is believed he actually did try to destroy the book, but found that it could not be done.

Retrieved from "https://atlantisthelostempire.fandom.com/wiki/Ferdinand_V?oldid=5184"
Community content is available under CC-BY-SA unless otherwise noted.