Gaetan "Mole" Moliére is a character in Atlantis: The Lost Empire who serves as mineralogist and excavations expert of the expedition to find the lost continent of Atlantis. He would reappear in the direct-to-video sequel Atlantis: Milo's Return.

Mole is an obese man with a shaven face. He is briefly mustachioed and buck-toothed. He wears a unique headgear and eyewear that he invented, complete with a flexible "hands-free" headlamp and eyewear adjusters. He also wears a thick, waterproof coat with a warm, furry collar and large pockets for tools, leather gloves and hardwearing mining boots.

Acute senses, particularly taste and smell, enable Moliére to correctly identify any type of mineral or soil without benefit or aid of any scientific apparatus 98.75% of the time.

Gaetan Moliére was born to a middle-class working family, the youngest of 4 brothers. Both his parents were teachers; Christof Moliére teaches University courses at the Sorbonne, and Gabrielle Moliére is a retired music teacher.

Gaetan displayed an early interest in subterranean pursuits at the age of 7 when he began exploring the vast sewer networks that lie underneath old Paris. By the age of 13, Moliére had developed a specialized type of goggles and headgear to wear while exploring caves in the surrounding countryside, as the sewers and catacombs held no further challenge or mysteries for him. He entered the Sorbonne at age 17 but left soon after when given the opportunity to act as a special technical adviser to a local mining company.

Soon thereafter, Moliére developed what could be termed his "specialty" of the ability to "taste" and identify various soils. He is sensitive to the light and generally distrustful of those he does not know well. He eats only roots and burrowing animals, and if rumor is to be believed, insects. He is also terrified of soap.

Mole participates in the expedition that locates the Shepherd's Journal in Iceland. He is later talked into agreeing to locate a giant crystal pictured in the book and sell it on the black market for a hefty price.

Milo James Thatch is warned on numerous occasions by Dr. Joshua Sweet regarding Mole's unusual behavior. This includes Mole's outrage when Milo discovers his bed being used to display the various lands Mole's dirt collection comes from and later telling Milo that it would be in his best interest not to know Mole's back-story. When Mole first meets Milo, he is able to learn his exact occupation and field of expertise from a speck of dirt on the latter's finger.

When the submarine Ulysses is attacked by a Leviathan, he and Vincenzo Santorini used one of the Sub Pods to battle the mechanical beast until they were ordered to retreat with the Aqua-Evacs following the destruction of the Ulysses. Mole and Vinny's Sub Pod is the only one to escape the Leviathan and surface into an air-pocket that leads to Atlantis.

Mole operates The Digger through their journey, used only when running into obstacles too great for or when Vinny runs low on explosives. Throughout the journey, he and Vinny would participate in pulling pranks on the young inexperienced Milo before he is taken in during a rest stop.

When the expedition gets dropped into a cavern as a result of escaping hostile fireflies, Mole is able to determine that they are at the base of a dormant volcano and that it could be reawakened by an extreme explosive force. Upon their discovery of the Atlanteans, Mole becomes enamored with Princess Kidagakash when she displays her ability to speak French, but his attempt at flirtation is met with a punch to the face.

After the Heart of Atlantis is recovered, Milo makes a plea to the others regarding what their actions will do. Mole is among those who side with Milo and participates in the battle to stop Rourke. He recognizes that the volcano has awaken when the Gyro-Evac crashes and helps bring the Heart of Atlantis is returned to save the city from destruction.

Mole is honored for his bravery in saving Atlantis. Upon returning to the surface, he would outfit his crystal to fit over the center of his bow-tie. However, he displays a sense of discomfort being dressed up and immediately disrobes and buries himself in one of the potted plants Preston Whitmore has in his study.

Mole would join the others in returning to Atlantis briefly in informing Milo and Kida of what is happening on the surface.

Mole was envisioned to be a comedic character from the start, but the filmmakers and designers had trouble figuring how he should look visually. Many early designs saw a more serious looking Mole before they saw the way story artist Chris Ure drew the character making him appear more rodent like. They took that design as the basis for the way Mole would look, adding that he was similar to Peanuts character "Pig-Pen."

Supervising animator Anthony DeRosa had further challenges, due in large part to the character's specialized headgear. Because there were numerous gadgets connected to the headgear, this resulted in more detail and design needed. De Rosa also had trouble looking for a look to the character that made him appear French before finding a profile of Charles de Gaulle and based further facial designs off of that.

The voice of Mole was performed by Corey Burton. Burton noted that performing Mole required him to let the character leap out of him by making funny voices. At the same time, he had to throw himself into the same and believe that he was immersed into the film's world as though it were real. 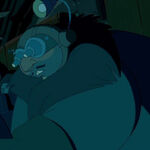 Retrieved from "https://atlantisthelostempire.fandom.com/wiki/Gaetan_Moli%C3%A9re?oldid=7096"
Community content is available under CC-BY-SA unless otherwise noted.