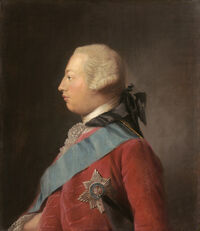 George William Frederick (c.4 June 1738-29 January 1820) was better known as King George III of Great Britain and Ireland from October 25, 1760 until their union on January 1, 1801, after which he became King of the United Kingdom until his death. With his life and reign lasting longer than previous British monarchs, he ruled during a great period of military conflicts involving his kingdoms, much of Europe, and places such as Africa, America, and Asia.

It is believed that in 1776, George III begrudgingly gave the Shepherd's Journal to King Louis XVI of France and his wife Marie Antoinette. This was done in an attempt to curry their favor during the British's conflict with the American colonies. Needless to say, the gesture proved futile as the French would lend their support to the Americans and would also maintain possession of the Journal.

Because he was noted for being reluctant in giving away the Journal in the first place, this has led to the belief that he may have recognized some value with the Journal.

Retrieved from "https://atlantisthelostempire.fandom.com/wiki/George_III?oldid=5185"
Community content is available under CC-BY-SA unless otherwise noted.