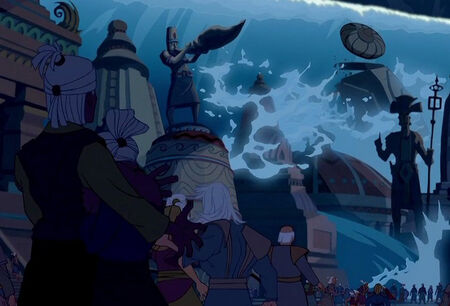 The Great Flood, or the MEH-behl-moak as it is called by the Atlanteans, is a cataclysmic event that resulted in the sinking of Atlantis. It is documented in the opening sequence of Atlantis: The Lost Empire

Sometime on or after 6586 BC, Atlantis was at the height of its dominance over other civilizations, behind an armada of flying machines wielding their far superior technological advancements gained from the crystal known as the Heart of Atlantis. However, their arrogance would become their undoing.

An accidental weapons discharge occurred, causing a massive tsunami that threatened to wipe out the whole of Atlantis. The Heart of Atlantis, aware of the danger the tsunami posed, bonded with the city's Queen to create a protective barrier that shielded much of the central city. The rest of the empire would be destroyed.

Because of the strength and size of the tsunami, Atlantis would be buried beneath the waters and later below the Earth's surface until coming to a place when it could thrive without the barrier. Due to the time and power needed to accomplish this, the Queen remained bonded to the crystal and was lost to the crystal forever.

There are varying interpretations about the Great Flood in the surface world.

The Great Flood is explained in the Bible, Genesis 6:9-8:22, as an act of God to teach humanity of depravity, faith, obedience, divine judgment, grace, and mercy. It is the primary element in the telling of Noah and the Ark.

According to Plato, the Great Flood was caused by the Gods in retaliation for the Atlanteans attempting to conquer Athens.

Due to recent discoveries of civilizations that had long ago been destroyed by gigantic tidal-waves sinking their lands, it has further fueled speculation into the probable existence of Atlantis.

Retrieved from "https://atlantisthelostempire.fandom.com/wiki/Great_Flood?oldid=7560"
Community content is available under CC-BY-SA unless otherwise noted.