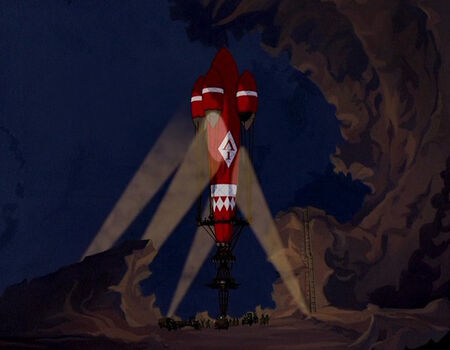 The Gyro-Evac is a zeppelin-like vehicle developed by Whitmore Industries. It is used to facilitate an airborne evacuation from an underground environment. In Atlantis: The Lost Empire, Lyle Rourke uses the Gyro-Evac in an attempt to return to the surface with the Heart of Atlantis.

The Gyro-Evac is almost primarily "packaged" inside a single truck, disguised as a water tanker. When deployed, the GE's envelopes fill with hydrogen and rise out of the truck's container. The remaining assembly of the GE covers tethers, catwalks, engines, bomb-racks, etc.

The Gyro-Evac is propelled vertically by two counter-rotating propellers at the bottom of the aircraft and while there appears to be little in the form of other propulsion to drive the craft in horizontal directions (not shown in the film at least), it is safe to assume that there is one due to the fact that the GE is armed with gravity-bombs that are released manually by crew members. Because of these armaments it's possible that the GE was intended to serve a dual function as an evacuation platform and as an offensive bomber.

The damage it suffers from the climatic battle between the Atlanteans and their allies and members of the expedition still loyal to Commander Rourke over the Heart of Atlantis results in it becoming engulfed in flames and crashing to the ground which awakens the dormant volcano to which the cavern belongs.

Retrieved from "https://atlantisthelostempire.fandom.com/wiki/Gyro-Evac?oldid=6974"
Community content is available under CC-BY-SA unless otherwise noted.