Lieutenant Helga Katrina Sinclair is the secondary antagonist in Atlantis: The Lost Empire who serves as second-in-command of the expedition to find the lost continent of Atlantis. She also serves as the personal assistant to Preston Whitmore.

She is a slender, athletic woman who is also Rourke's business partner in the extortionate of Atlantis. She is pear-shaped, has fair skin, long blonde hair tied back in a braid, a mole on her left cheek and red lips. She wears a white shirt, gray gloves, black sweater, blue eyes, red lips, green custom-made military pants and brown boots. she is not the best of the best

Miss Sinclair is skilled as a coordinator and drill instructor. She also possesses an analytical mind ideally suited for strategy, tactics or campaign planning. Her charisma, combined with her intelligence and aggressive nature, makes her an excellent trainer and enforcer.

She is the second-in-command behind Commander Rourke (who is both the muscle and brains of his team); when her commanding officer issues and order, Miss Sinclair makes it her personal business to see to it that everyone in her command follows it to the letter. She is levelheaded in a crisis (see attachment re: San Domingo, 1904) and highly skilled in many forms of small arms combat; studied Aikido in Philippines under Moreihei Ueshiba 1904-07, attaining rank of Yudansha-Yodan. Expert in disciplines of Henka Waza, Tanto Dori and Tachi Dori.

Skilled in savage, tactical combat knife fighting, Colt throwing knife, bo staff, kama, field tanto, katana, as well as most conventional small arms. Has taught rifle and shotgun at Quantico, Virginia, 1911. Despite her expertise, however, she is still no match for the likes of Lyle Rourke, as shown when she is overcome by him in underarmed combat and thrown from the balloon. However, this is more due to the advantages that come with Rourke's gender in strength, experience, speed, physique, and arm length, all advantages granted to him as a man. Nevertheless, she was one of the few who could stand up to him in a fight, though she did ultimately get overpowered.

The oldest of six children (and the only girl), Miss Sinclair grew up fighting with her fists as well as her wits.

Instead, with the influence of her father and brothers, Miss Sinclair began learning the combat arts. While stationed in Maryland at age 17, she was introduced to Commander Rourke, and after relocating to Fort Dix, began tactics and firearms training under him at the behest of her father. Her skill impressed Commander Rourke, as well as her potential (in Rourke's opinion) as a covert agent and spy.

Helga participates in the expedition that locates the Shepherd's Journal in Iceland. Being Commander Rourke's most trusted ally, she is privy to his secret objective in locating a giant crystal pictured in the book and selling it on the black market for a hefty price. Whitmore sends her to retrieve Milo James Thatch so that he would step in for his deceased grandfather Thaddeus Thatch in guiding the expedition to find Atlantis.

Serving as second-in-command of the expedition, she carries out Rourke's orders and later operates the Aqua-Evac carrying the executive members of the expedition when escaping the Leviathan after it destroys the Ulysses. Upon the discovery of Atlantis as a still thriving civilization, Helga expresses hesitation about the mission now that there are living people present. Nevertheless, she continues to follow Rourke in proceeding with locating the giant crystal, discovered to be the Heart of Atlantis and the power source keeping the city alive.

She is present in witnessing Princess Kidagakash being infused with the Heart of Atlantis and is steadfast in her loyalty to Rourke after Milo pleads with the rest of the expedition to reconsider their actions. She and Rourke are on the Gyro-Evac that would carry them and the crystal back to the surface when Milo and the others return to engage in battle.

After Milo crashes his Ketak into one of the balloons, it begins to descend. After emptying the Gyro-Evac in an attempt to lighten the load, Rourke suddenly tries to throw her off to get the balloon ascending. Helga manages to swing back on and kick him around for breaking their partnership, but Rourke quickly overpowers her, grabbing her foot and breaking her ankle; with the words "nothing personal," he tosses her off the balloon making her fall from an enormous height. She manages to survive long enough to get even with Rourke by firing a flare gun at the main balloon, thereby preventing him from ascending any further to the surface.

While her exact moment of death is not witnessed, she is presumed dead given the circumstances of having been thrown from an extraordinary height and her surroundings shortly afterward being engulfed with lava as a result of the crashing Gyro-Evac awakening the volcano all were present in. Due to secrecy of the expedition, the cover up story is that she went missing.

Helga was created to be the femme fatale of the group of characters in the film. She had to appear graceful as Whitmore's personal assistant while also being a tough-as-nails commander during the expedition. Writer Tab Murphy noted her conception was influenced by noir films, harking back to those featuring the likes of Humphrey Bogart interacting with a platinum blonde or a smoking, mysterious babe.

The filmmakers believed Helga was a chance for them to design a character that would appear straight from a comic book. For her illustrations to evoke the graphic art style, she was animated and cleaned-up almost exclusively at the animation studio in Paris. This was an interesting case as all of the other characters were animated and cleaned-up at the Burbank studio, meaning the filmmakers had to pay extra attention that her animation fit seamlessly with the others when previewing her scenes.

The supervising animator of Helga was Yoshimichi Tamura. A French-Japanese animator working at the Paris studio at the time, he added influences of the anime style of animation and design into the character. The voice of Helga was performed by Claudia Christian. Helga was one of the few characters with a performer hired to do video reference for the animators in Dawn Heusser.

After initially developing a cult following, Helga has become one of the more popular characters to come out of the film. Aside from her design that appeared heavily inspired from comic books and Japanese animation, she won over fans with her no nonsense and unapologetic personality. Some fans do not consider her a villain, explaining that she merely conducted herself the way any other military soldier would regardless of circumstances and situations. Furthermore, a few would go so far as to consider her a minor heroine as a result of her shooting the Gyro-Evac so that Rourke could not escape with the Heart of Atlantis.

Fan fiction stories involving Helga have largely dealt with her fate at the end of the movie, in particular the notion of her survive being thrown off the Gyro-Evac at such a high altitude and some how avoid getting killed by the erupting lava. Some of these stories would define her with the heroine idea and see her eventually earn forgiveness or at least some form of acceptance from the Atlanteans. Another set of stories deal with her past relationship with Rourke as well as explore her having been married, resulting in the Christopher Jenkins character being developed. 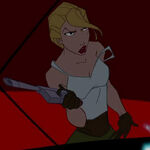 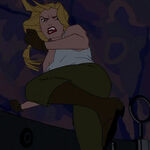 Retrieved from "https://atlantisthelostempire.fandom.com/wiki/Helga_Sinclair?oldid=7146"
Community content is available under CC-BY-SA unless otherwise noted.