Kashekim Nedakh is a character in Atlantis: The Lost Empire, who was the King and ruler of the lost continent of Atlantis. He was also the father of Princess Kidagakash Nedakh.

Kashekim Nedakh was the king and ruler of Atlantis at the height of its power. In his arrogance, he used the Heart of Atlantis as a weapon and begins a campaign that sees him conquer and colonize other lands and cultures. This would bring Atlantis' downfall as his pride was carried over into his army, which results in the accidental weapons discharge that creates the Great Flood that sinks the city. Additionally, his wife was chosen by the crystal in an act to save the central city from being destroyed outright. However, his wife remained bonded to the crystal for too long that she became lost to it, leaving their daughter Kidagakash without a mother. As if understanding of the situation, Kashekim warns Kida to look away from the crystal that had just absorbed her mother, but he himself looks directly at the crystal during its actions and appears to be blinded as a result. As later dialogue suggests, he is able to see when commander Rourke has a sidearm and recognizes it as a weapon, and that Helga is threatening Kida with a gun when demanding his guards drop their spears.

With the city no longer the empire that it once was, and recognizing how his actions brought about their situation, Kashekim had virtually all of their history erased. He had whatever knowledge they had on the Heart of Atlantis destroyed and hid it underneath his chambers, reasoning that its use would only lead to history repeating itself. This has also had an effect on everyone else in Atlantis, as the millenniums passed, they slowly began to forget about their own history and culture. As a result, he clashes with his daughter, who herself has forgotten much of the past, over the state of the city with him believing that their way life is preserved while she believes it is merely dying a slow death.

At the height of Kashekim's rule of Atlantis, an accidental weapons discharge creates a gigantic tsunami that threatens the city. Kashekim tries to lead his family to a shelter, but then witnesses his wife being chosen by the Heart of Atlantis to save the city. He covers the eyes of his crying daughter Kidagakash, but allows himself to look directly at the crystal. Doing so blinds him for the rest of his life.

When the Atlantis expedition arrives, he was found to be in a state of decay. Nevertheless, he maintains a firm stance of ruling, letting his daughter know that she would have previously killed any outsiders on sight. When they are left alone, the two argue over the state of the city with Kida believing that their culture is dying while Kashekim believes it is better this way so it is preserved.

When Rourke takes a more forceful approach to finding the Heart of Atlantis, he goes so far as to strike the already dying King before solving the riddle to where the crystal is hidden. It is sometime before the chaos of the situation calms to where Dr. Joshua Sweet and Milo James Thatch check on his condition. Kashekim informs Milo of why it was essential for him to hide the crystal, noting of it being too powerful for any one person to control, and that it developed a consciousness of its own. He adds that Milo has little time to return the crystal, otherwise Kida will be bonded to it for too long and be lost within it just like his wife. He gives Milo his crystal to rule in his place and begs him to save the city and his daughter before he dies.

With the city saved, Milo helps Kida construct a stone effigy of Kashekim to join the others that orbit the Heart of Atlantis. Kashekim Nedakh becomes living again and his eye sight returns in Atlantis 3: the sea of monsters.

The creation of Kashekim was said to have been one of the most difficult from start to finish. Fine-tuning the character's personality became a task unto itself, with some early designs having him as much more of an iron-fisted ruler than he came out to be. Much of his firm beliefs have remained in place, but others were fleshed out as production progress. The change in the opening prologue also opened for an opportunity to further explore his character, allowing for audiences to see how he has come to be the character that he is later on and to better understand his actions.

The supervising animator of Kashekim was character designer Michael Cedeno and Head of Cleanup Marshall Toomey was the lead key cleanup on the character. In terms of animating the character, Cedeno had to illustrate a character who struggled so much just to speak one word. Additionally, both Cedeno and Toomey found a great deal of difficulty in making sure Kashekim's facial tattoos were uniform and consistent throughout. This has often led to the decree that lasted for a long while of never again having a character with tattoos in a Disney animated feature.

Leonard Nimoy provided the voice for Kashekim. Cedeno noted how he was often left in awe of how Nimoy would provide rich character just through his voice, being able to project a moldy and dusty quality in performing the character. Nimoy previously worked with linguist Marc Okrand, who developed the Atlantean Language, on the Star Trek films and hosted a documentary television series called In Search of... with one of the first episodes based upon the subject of Atlantis. 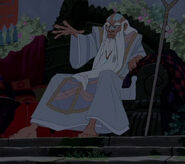 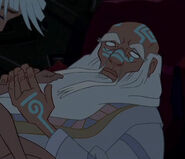