Kidagakash Nedakh (nicknamed Kida) is a character in Atlantis: The Lost Empire who is Princess/Queen of the lost continent of Atlantis. She would reappear in the direct-to-video sequel Atlantis: Milo's Return. She is the deuteragonist in both films.

Kidagakash Nedakh is the daughter of Kashekim Nedakh, the king of Atlantis during its height of power. At a very young age, she witnessed the near destruction of the central city of the continent when her mother, The Queen of Atlantis, is called forth by the Heart of Atlantis to save the city. Due to her father wishing to prevent a repeat of what happened and thereby erasing much Atlantean history, she begins to lose the ability to remember the past culture and can only recall her mother being taken away by what she describes as a great star in the sky. She believes that her people are beginning to lose their sense of self in Atlantis: The Lost Empire, and begins to investigate the past to rediscover their lost civilization.

Page 62 of the novelization describes her "a wide-eyed young woman. She had long blonde - almost white - hair and a bright blue tattoo just under her left eye. Milo couldn't help noticing she was the most beautiful girl he had ever seen."[1]

She also wears a shard of the crystal around her neck. As a princess, she wears only a simple blue bikini with a sarong-type skirt and walks barefoot.

With the power of the Atlantean crystal, Kida and the other Atlanteans are given abnormally long lives. Though Kida is roughly 8,500-8,800 years old (according to Milo) she appears as a girl in the prime of her youth.

Like all Atlanteans, Kida is a master linguist, with the ability to decipher non-native tongues by simply referring to Atlantean, which is regarded as the root dialect of the ancient world. She has also acquired excellent hunter-gatherer skills, due to millennia of scavenging through the planet's many caverns and catacombs in search of food and resources. A true warrior princess, Kida is among the finest protectors of Atlantis. Using Atlantean martial arts and tactics, Kida was able to best three of Rourke's men in close range combat, and could have defeated them if Rourke hadn't intervened. At the same time, she has a keen understanding of politics and continues to develop her natural leadership skills so that she can be a strong-willed Queen for her people.

But perhaps her most impressive ability, is her potent mental connection with the Heart of Atlantis, and her ability to transiently bond with it as one entity. While in this state, Kida is virtually indestructible. Additionally, she said "all will be well" when she was under the influence of the Heart, despite knowing that she would be taken by Rourke as soon as she had bonded her very essence with it. This implies that the Heart gives her prophetic abilities when she telepathically connects to it.

At a very young age, Kida is present when a gigantic tsunami threatens the central city of Atlantis. She watches in tears as her mother is suddenly chosen by the Heart of Atlantis to save the city, leaving the young child behind. Her father quickly covers her eyes so as not to look directly at the crystal, but he does and becomes blinded as a result.

Centuries later, Kida leads a small group of hunters and gatherers through the earth's many caverns and catacombs when they notice a large group of outsiders approaching their city. They keep watch on them with her believing that their being able to find Atlantis could mean that they could be of help. When the expedition desperately escapes an attack from fireflies, they come upon a lone member who is injured. Kida decides to help heal the outsider before taking off.

When the expedition eventually finds Atlantis, Kida and her group confronts the expedition. When the man she had just healed reveals that he can speak Atlantean, she opens up to them and immediately takes them to her father. However, her father demands that they leave without explaining why. When left alone, she gets into an argument with her father regarding how their way of life is dying while he believes it is being preserved.

Unconvinced, Kida singles out the man who is named Milo Thatch. Realizing that she does not even know how to read the Atlantean written language, he agrees to help her as they explore the city. They come to a pond where underneath are numerous writings she has him translate. He is able to figure out information regarding the Heart of Atlantis, which is the power source keeping the city alive and was what took her mother away.

Upon surfacing, they find that the rest of the expedition plan to steal the Heart of Atlantis and sell it on the black market. Their leader Lyle Rourke forces Milo to cooperate by having a gun pointed at Kida. Kida watches in horror as they ransack her father's chamber, which is followed by the leader striking her father down before he figures out where the Heart of Atlantis is hidden. Inside the Crystal Chamber, she is called upon by the crystal and she bonds with it before being encased within a container.

Kida remains inactive as a battle ensues for her, of which Milo is successful in bringing her back to the city in time for her and the Heart of Atlantis to raise the giant stone guardians from their slumber and great a force field to protect the city from an awakened volcano. With the city saved, Kida is released from the crystal and leaves her with a bracelet of hers that her mother held onto when called upon previously by the crystal.

Time has passed and Milo and Kida, now married, continue to rule Atlantis while helping the civilians rediscover their lost culture. However, one day, they are visited by Mister Whitmore and all their old friends from the excursion to find Atlantis, including Sweet, Audrey, Cookie, Mrs. Packard, Mole, and Vinnie.

The reason for their return is due to the fact that they believe an Atlantean creature is threatening the waters off of the Norwegian coast. Kida first believes it to be another Leviathan, like the one that guards the entrance to the city, who permitted Whitmore and the others through without confrontation this time since it knew they were friends.

Concerned about this possibility of something of Atlantean origin threatening the surface world, Kida and Milo agree to return to the surface to aid their friends with confronting the threat.

From the beginning, the filmmakers wanted Kida to stand out from other Disney Princesses both in appearance and in personality. So as not to appear as another damsel in distress, they created her to be a warrior woman with strength to overcome hostility.

The supervising animator of Kida was Randy Haycock. Randy further wanted to develop a unique appearance for Kida that made her different from the other Disney Princess. Going through various magazines and looking at models, he drew her with a slightly wider nose and full lips. He also wanted to play upon the character's personality of being stoic and firm while also having a soft, playful side that is let out when she meets Milo.

Cree Summer provides the voice of Kida. Cree was excited to finally get to voice a character in a Disney animated feature after having been in the business for over fifteen years by that point. Haycock noted how he felt intimidated by Cree's wild and unique personality the first time he met her and drew inspiration from that into developing scenes where Kida and Milo first meet. Natalie Strom voiced Kida as a child in the film's prologue, which was added in late in production, while Cree would reprise the character in the sequel. 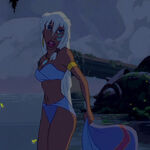 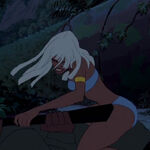