Commander Lyle Tiberius Rourke is a character in Atlantis: The Lost Empire who serves as commanding officer of the expedition to find the lost continent of Atlantis. He is also the film's main antagonist.

Rourke is a very large, muscular, middle-aged man with a powerful build. He has gray balding hair with each white streak on both side, brown eyes and thick black eyebrows. Initially, Rourke wore a standard military uniform that usually army commanders wear over a gray tanktop, green military pants and brown boots. After the pyrefly attack, he loses his military coat. This transition symbolizes who Rourke truly is as a person. After being crystallized by Milo during the climax, his clothes was fused to his body as he became a bright blue crystallized humanoid monster, a true reflection of his insanity. Cracks appear on his body with beams of fiery red light shining through as every movement causes him extreme pain before being obliterated to pieces.

Joined U.S. Army in July 1875. Rose to rank of Artillery Sgt., 1877. Fought at Wounded Knee Uprising, 1881. Censured for use of excessive force and refusal to acknowledge white flag of surrender. Graduated second in class from West Point Academy, 1886.

Also taught courses in survival tactics, strategy, and chess. Began freelance career in May 1903 for British National Museum. Led expedition to Valley Of Kings in Egypt, 1903. Led return expedition to Egypt, 1905. Led expedition to Bolivia and Peru under Professor Thaddeus Thatch to retrieve Idol Of The Sun, 1906-08. Lead expedition for Smithsonian Institution to Antarctica, 1909; credited with discover and destruction of lost city of Shub Nigruth.

As seen in the film, he still maintained the amazing physique developed from his military training, as he was in great shape, being 6 feel and 4 inches and over 250 pounds of solid muscle. This was much more prominently shown when he was wearing a tank top. His strength and fighting skill showed in how easily he was able to overpower other people with his kind of military experience, such as Helga Sinclair. He was able to take two of her vicious kicks with no damage and then effortlessly toss her off a blimp with a smile on his face. His ability to toss around other trained combatants like Helga so easily shows his military experience and power.

Born the son of a Cavalry Officer, Lyle T. Rourke learned the transitory life of a military man at an early age. Rourke Sr. was killed at Battle of Spotsylvania, leaving behind his wife and only son, Lyle. After repeated expulsions from boarding school (fighting), Rourke determined to follow in his father's footsteps, joined the Military at the age of 15 by lying to his induction officer about his age.

Rourke exhibited a remarkable talent for leadership, owing to his analytical mind and charisma. He was married in June of 1887, but his wife left him after only 4 months of marriage. He does not make friends easily. He is a pragmatist both personally and professionally; he tends to take what he needs and discards that which he considers "useless baggage."

Rourke leads the expedition to find the Shepherd's Journal in Iceland. When Thaddeus Thatch is not looking, he rips out a page concerning a giant crystal and convinces virtually everyone else on the forthcoming expedition to Atlantis to retrieve it and sell it on the black market for a hefty sum.

As commanding officer of the expedition, he is primarily responsible for making the decisions that will ensure the mission's success as well as the survival of his crew. This includes the belief of there being acceptable losses in his attempt to defend the Ulysses from an attacking Leviathan before ordering all hands to abandon ship.

He has little contact with others outside of his directing orders, preferring to stand apart. When the expedition is dropped into a cavern while escaping the attack of fireflies, he recognizes a possible exit route through the top of the volcano they are in. With the discovery of Atlantis being alive and thriving, Rourke maintains to a hesitant Helga Sinclair that their primary objective remains as planned.

After attempting to learn from the Atlanteans where the crystal might be, he turns to Milo Thatch to decipher the stolen page. While Milo refuses to play along with him, Rourke becomes more forceful and authoritative, having a gun pointed at Princess Kidagakash. He then has the doors to the king's chambers blown open and demands King Kashekim Nedakh explain the riddle that reveals the location of the crystal, going so far as to strike the already dying king in front of a horrified crew. Sitting on the throne and threatening to execute the king, Rourke manages to figure out the riddle on his own and proceeds to descend into the chamber with Helga dragging Milo and Kida along.

While Milo and Rourke argue over how the crystal is to be retrieved, Kida is called upon by the Heart of Atlantis and is bonded with it. Rourke then has Kida sealed up in a container and prepares to leave. Milo pleads that their actions will kill the Atlanteans, but Rourke does not care and decks him. However, he ends up losing all, but Helga, of the key members of the expedition when they develop a conscience. Rourke has the bridge destroyed to prevent them from following in an attempt to stop him.

Rourke has the top of the volcano blown open and has a hot air balloon ascending with the container when Milo and the others arrive in flying stone fish vehicles. During the chaos, Milo crashes his stone fish into one of the balloons, causing it to descend. With all of the extra weight having already been thrown off, Rourke tosses Helga off in an act of self-preservation. However, a barely alive Helga gets back by destroying the main balloon with a flare gun.

Enraged, Rourke begins to take his aggression out on Milo and uses an axe. He hits a glass cover of the container, with glass shards becoming embedded with the Heart of Atlantis. As Rourke holds Milo up for a killing blow, Milo cuts him with one of the shards and he begins to transform into crystal form. Rourke still attacks, but a chance situation causes him to be hoisted into the steel moving propellers, destroying him for good. Due to secrecy of the expedition, the cover up story is that he had a nervous breakdown and went missing.

As has been the case in their previous films, directors Gary Trousdale and Kirk Wise wanted the film's villain not to be the usual mustache-twirling bad guy. They wanted the character to have complexity by not making him inherently evil, but rather greedy. The idea being that they wanted a three-dimensional character as opposed to a two-dimensional villain.

The supervising animator of Rourke was Michael Surrey. At first, Mike was excited at animating the character because villains are generally the most desired characters for animators as they are generally allowed to do whatever they pleased. Mike then realized that it was not going to be like that early on as Rourke was not the typical type of villain. It was not until the climatic battle in the volcano that Mike was able to really animate the villainous scenes he had been hoping to do.

James Garner provided the voice of Rourke. While Tommy Lee Jones, Jack Davenport, and Kurt Russell were among those also considered for the role, Garner was chosen for his extensive acting background in action films, westerns, and war movies, making his voicing a character like Rourke fit him like a glove. Garner was noted for having fun doing the role and was impressed with Trousdale and Wise's ability to direct what he describes as an ensemble piece. 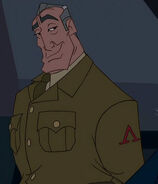 Add a photo to this gallery
Retrieved from "https://atlantisthelostempire.fandom.com/wiki/Lyle_Tiberius_Rourke?oldid=7389"
Community content is available under CC-BY-SA unless otherwise noted.