Milo James Thatch is the main character in Atlantis: The Lost Empire who serves as linguist and cartography expert of the expedition to find the lost continent of Atlantis. He reappeared in the direct-to-video sequel Atlantis: Milo's Return as King of Atlantis by marriage to Kidagakash Nedakh.

Milo is a slender, young-looking, handsome 32-year-old man. He has light brown hair, fair skin, brown eyes, thick matching eyebrows and large black spectacles. His attire in the beginning of the film is a white shirt, a red bow tie, a green vest with blue pants and brown shoes. For the expedition to Atlantis, he wears a thick, olive drab military trench coat with both dark green innards and a pair of buttons vertically on the left side and a slit on the back, a cream, long-sleeved shirt with a ribbed collar and a pair of vertical olive buttons, olive knickerbockers, a brown belt with a gold square buckle, timber wolf spats (waterproof leg protectors) and gray boots with taupe soles. He also has a tattoo on his left shoulder in the end of the film.

Milo James Thatch is a cartographer and linguist, not to mention an amateur plumber. In addition to his formal training as a linguist and translator, Milo was tutored by the legendary Thaddeus Thatch (Paternal Grandfather) in the fields of Cartography and Archaeology. Employed in Washington, D.C. as a linguist at the Smithsonian Institute.

Milo James Thatch was raised and educated by his Grandfather Thaddeus Thatch. Milo took after his paternal grandfather with regard to his affinity and passion for languages and antiquities. Despite his expertise and accomplishments, Milo is rumored to have been employed primarily due to his relationship to Thaddeus Thatch. Currently, resides in Washington, D.C., with only a Persian longhair cat (Fluffy), and his own extensive library collection.

In 1914, Milo James Thatch is working as a linguist at the Smithsonian Institute in Washington, D.C. He is preparing for a presentation he has scheduled with the board of directors to seek funding to locate a book called the Shepherd's Journal in Iceland, believing it will lead them to Atlantis. Shortly after four o'clock, he receives notice that the meeting had to been moved to three-thirty. He then immediately receives another notice that the matter is closed due to his supposed no-show.

Angered by the deceit, he chases after the board members and manages to catch Fenton Harcourt. Harcourt lays it thick that the museum only funds expeditions based on fact and not folklore, also belittling Milo's skills by saying that he is needed to tend to the boiler during winter. Milo attempts to hand over his letter of resignation, but Harcourt adds that no other institute would fund his expedition, and he would throw his career away just like his grandfather.

A disheartened Milo returns home to find Helga Sinclair waiting to bring him to her employer, discovered to be a friend of Milo's grandfather in Preston Whitmore. Whitmore presents a parcel from Milo's grandfather that turns out to be the Shepherd's Journal. After a test by Whitmore on Milo's commitment to finding Atlantis, he reveals that the expedition is all set and ready to go. All that's left if for Milo to fill in for his grandfather to translate the directions from the book.

Milo has difficulty getting along with the others of the expedition, some even pulling pranks on him. In the end, they finally let him in during a rest stop. They manage to get him to stop reading the book for a moment, even though there appears to be a page missing. Milo and some others begin to open up about themselves. In the middle of the night, Milo awakens to use the restroom. He accidentally points his flashlight at a lamp housing fireflies that attack. The expedition is dropped into a cavern with Milo seemingly separated from everyone else.

When Milo comes to, he finds himself surrounded by strange figures. Upon noticing a scar on his shoulder, one of the figures removes its mask, revealing itself to be a human woman. Milo watches in shock as the woman uses a crystal to completely heal his scar. The figures make off with Milo following until he finds himself looking at Atlantis, alive and thriving. The figures return, and he recognizes them as Atlanteans, able to communicate with them until it is discovered that they can speak other languages since they root back to Atlantean.

Though the meeting with the Atlantean King Kashekim Nedakh does not go so smoothly, the woman Milo met, revealed to be Princess Kidagakash Nedakh, leads him on a tour of the city while they get to know one another. Milo's interest in looking for the power source is sidetracked when he discovers that no one in the city can read the Atlantean language or even remember much of their past culture. Kida leads him on a swim where numerous writings are found and Milo begins to understand the true nature of the power source known as the Heart of Atlantis, as it is responsible for keeping the city alive.

Upon surfacing, Milo learns of Lyle Rourke's true intentions, having been the one who stole the missing page from the book and leading the rest of the expedition to find the crystal and sell it on the black market. Milo does not join them, but is forced to cooperate when Rourke has a gun aimed at Kida. Milo translates the page that the crystal is hidden in the King's Chamber, but does not understand the riddle. Rourke figures it out and forces Milo, along with Helga forcing Kida, to descend into the Crystal Chamber to recover it. Milo and Rourke argue about how to bring the crystal down until Kida is called upon by the crystal, and they bond.

As Rourke and the expedition prepare to leave with the Heart of Atlantis, Milo makes one last plea to them to reconsider their actions as it would kill the Atlanteans. Rourke punches him, but the majority of the key members of the expedition end up siding with Milo. Milo learns from the dying king that he must also save Kida, for if she remains bonded to the crystal for too long, she will be lost to it forever. King Kashekim passes on his crystal to Milo Thatch as he dies. After a pep talk from Joshua Sweet, Milo leads the others in using Ketaks to stop Rourke.

During the battle, Milo and Vinny Santorini act as decoys while Sweet and Audrey Ramirez attempt to free the container holding Kida and the Heart of Atlantis. When Rourke and Helga force them to retreat, Milo crashes his stone fish into the Gyro-Evac and causes it to descend, although Rourke gets it back going by tossing off everything else including Helga. As Rourke and Milo fight, Helga destroys the main balloon using a flare gun, causing Rourke to become enraged. Rourke attacks with an axe, smashing a glass cover. Milo notices energy from the crystal seeping into the glass shards and uses it to cut Rourke, turning him into a crystal. A chance swing by Milo causes Rourke to shatter against the moving propellers.

Though Milo and the container avoid the Gyro-Evac crashing upon them, it does result in the volcano awakening. Milo and the others manage to get the Heart of Atlantis back to the city in time to save it and Kida is freed from the crystal. Milo chooses to stay behind to help the Atlanteans rediscover their lost culture and has also fallen in love with Kida. He slips a package to be given to Whitmore on the surface, thanking him for his belief in the Thatches. Now King of Atlantis, Milo constructs the stone effigy of Kida's father to join the other stone effigies of the past kings that orbit the Heart of Atlantis now hovering over the restored city.

Time has passed and Milo and Kida continue to rule Atlantis while helping the civilians rediscover their lost culture.

The development of Milo as a hero was a difficult one for the filmmakers. Heroes in general have been widely regarded as the least interesting for animators to work on, so the filmmakers sought to develop Milo as a character with a great deal of personality. There was an early concept that Milo was the descendant of Blackbeard the Pirate, but that was abandoned in favor of Milo discovering his inner self and love for exploration rather than his inner pirate.

The supervising animator of Milo was John Pomeroy. Pomeroy had the unique challenge of trying to figure out what a linguist looked like and, according to Marc Okrand, who developed the Atlantean language for the film, used him as a basis for the design of the character. Pomeroy has also noted that Milo was the closest in his then-thirty years in the business that he had animated a self-portrait. Because Milo appeared in virtually every scene of the film, he was one of the few characters requiring a team of animators working under Pomeroy.

Michael J. Fox provided the voice of Milo. Fox reportedly had to decide between this film and Titan A.E., another science fiction animated feature from Don Bluth, and left it to his son to decide. Fox enjoyed not having to worry about the way he looked and could do what he needed, be it contorting himself, in order to project the right emotion through his voice. Co-director Gary Trousdale noted that Fox, despite being in his late thirties at the time, could still project a youthful exuberance needed to voice a character like Milo. James Arnold Taylor would replace Fox in the sequel for budgetary reasons. 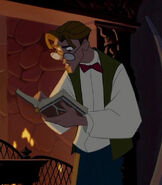 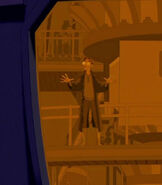 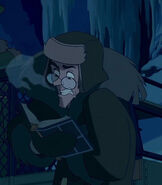 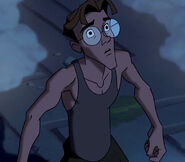