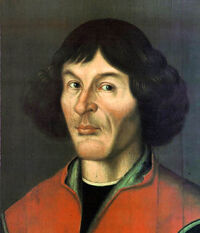 Nicolaus Copernicus (c.19 February 1473–24 May 1543) was a Renaissance astronomer and the first person to formulate a comprehensive heliocentric cosmology which displaced the Earth from the center of the universe. He is believed to be a Keeper of the Journal.

It is presently unknown when and where Copernicus encountered the book known as the Shepherd's Journal. It is most likely that he either assisted Leonardo da Vinci in deciphering the book or viewed it when it was under possession of Ferdinand V. Given his position as an astronomer, he perhaps assisted da Vinci to better understand the origin and nature of the crystals explained in the book. Furthermore, the book predated Copernicus' published assertion theorizing that the sun did not move, so it could be reasonable that his theories were inspired from having helped da Vinci translate the book.

Retrieved from "https://atlantisthelostempire.fandom.com/wiki/Nicolaus_Copernicus?oldid=5193"
Community content is available under CC-BY-SA unless otherwise noted.