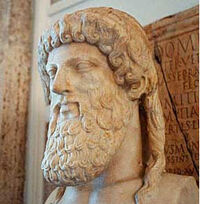 Plato (c.428/427-348/347 B.C.) was a Classical Greek philosopher, mathematician, and writer of philosophical dialogues. He was the founder of the Academy in Athens, the first institution of higher learning in the Western world. He helped lay the foundations of Western philosophy and science along with his mentor, Socrates, and his student, Artistotle. He is also the earliest known publisher of the subject of Atlantis.

It is unknown how Plato came about publishing the story of Atlantis in the dialogues of Timaeus and more elaborately in Critias, both written and published in 360 B.C. It is believed that Critias was Plato's uncle (c.460-403 B.C.) as well as being one of the more violent members of the Thirty Tyrants. In the dialogues, it was through Critias that Plato learned of the lost continent from Solon.

The connection between Solon and Critias has become a highly debated subject, in large part due to the time difference between them. According to Plato, Critias learned of Atlantis through his grandfather, who in turn learned of it from Solon. However, researchers argue that there is still a timeframe issue. They believe that the Critias who learns of Atlantis is actually the tyrant Critias' grandfather, meaning that it would be his own grandfather who met Solon.

Plato is at the center of the controversy regarding the authenticity of the existence of Atlantis. Plato's writing itself comes into question whether or not it is a work of fact or fiction. In one instance, Plato incorporated the mythological Greek gods into the story, Poseidon being the most prominent. The dialogues also contain numerous anachronisms, as noted with the connection between Solon and Critias. Furthermore, the Critias dialogues were never completed for unknown reasons.

Retrieved from "https://atlantisthelostempire.fandom.com/wiki/Plato?oldid=7123"
Community content is available under CC-BY-SA unless otherwise noted.