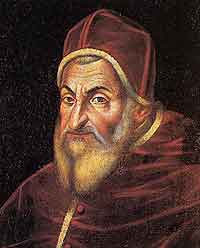 Pope Sixtus V (c.13 December 1520–27 August 1590) was born Felice Peretti di Montalto. He was elected as Pope in 1585 and was a prominent figure in the Counter-Reformation., being open to large ideas and throwing himself into his undertakings with great energy and determination.

In 1565, Felice was attached to the Spanish legislation of the Church as part of an investigation of Archbishop Bartolome Carranza of Toledo, who was charged with heresy. During this time in the country, he got a look at the book that King Philip II proudly flaunted at royal functions. It is believed that Felice was fascinated by the book, even though it was generally perceived by most as heretical.

In 1589, now known as Pope Sixtus V, he would get one last look at the book. When he did, he would re-christen it "The Shepherd's Journal" based on its ornate, almost religious illuminations. From that point onward, the book would be remembered by its new name.

Retrieved from "https://atlantisthelostempire.fandom.com/wiki/Pope_Sixtus_V?oldid=5196"
Community content is available under CC-BY-SA unless otherwise noted.