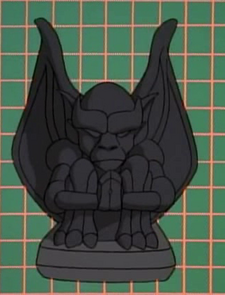 The Praying Gargoyle is a small statue with magical attributes. Though it primarily appears in Gargoyles, series creator Greg Weisman has since tied it into the mythology of Atlantis: The Lost Empire through an unproduced episode of Team Atlantis and later in the Gargoyles comic book series published by Slave Labor Graphics.

It is unknown when the Praying Gargoyle was made by the Atlanteans, though it is likely to have occurred before the Great Flood. It is speculated that it was a gift to the gargoyle race out of companionship. It is made through a combination of a gargoyle stone skin, very powerful magic, and an Atlantean crystal shard hidden within.

The Praying Gargoyle is found to be in Paris, France in 1920 by Demona. She attempts to use it to animate man-made stone gargoyles into an army that would destroy the city, but she is stopped by Fiona Canmore and a group led by Atlantean Queen Kidagakash. After managing to escape, Demona hides the remains of the statue in Notre Dame Cathedral.

In 1980, the statue regenerates and is once again recovered by Demona. Fiona's descendant Charles Canmore tries to stop her, but she manages to kill him instead. She holds onto the statue until 1996, when she uses it to protect the gargoyle race while she launches Operation Clean Slate, a plan to exterminate the human race in full. Her efforts are stopped this time by a clan of gargoyles led by her former love Goliath, who destroys the statue during the battle.

A few nights following the failure of Operation Clean Slate, Demona returns to the remains of the Praying Gargoyle and removes the Atlantean crystal.

Only a few of the powers the Praying Gargoyle possesses has been revealed to date, though it is implied that there is more.

Retrieved from "https://atlantisthelostempire.fandom.com/wiki/Praying_Gargoyle?oldid=6699"
Community content is available under CC-BY-SA unless otherwise noted.