Preston Bennivitz Whitmore is a character in Atlantis: The Lost Empire who finances the expedition to find the lost continent of Atlantis. He would reappear in the direct-to-video sequel Atlantis: Milo's Return.

Whitmore is an old, slender and balding man. He has white, spiky hair and beard.

Preston Whitmore is an eccentric millionaire, industrialist, and philanthropist. He attended Georgetown University where he met and befriended Thaddeus Thatch, maintaining a lasting friendship until the latter's passing. Both would graduate in 1866 with Thatch becoming an archeologist and Whitmore beginning his rise to financial success with Whitmore Industries.

While Whitmore was regarded as a visionary pioneer through his company's advancement in technological progress, and despite his eccentric personality, Whitmore was an extremely private person. He only made public appearances when necessary. Otherwise, he was reclusive and only allowed those closest to him to meet with him.

Whitmore and Thaddeus enter into a bet where if Thaddeus finds the Shepherd's Journal, Whitmore will fund the expedition and even kiss him full on the mouth. In 1911, Whitmore funds the expedition that finds the book in Iceland. Shortly afterward, Thaddeus passes away. It deeply saddened Whitmore, as he respected Thaddeus and knew he had "died a broken man" because the people at the museum made fun of him. He later admits to Milo that he wished he had a single proof to show Thaddeus was right. Needing a linguist to translate the directions to finding Atlantis, Whitmore has his personal assistant Helga Sinclair retrieve Thaddeus' grandson, Milo James Thatch. He convinces Milo to participate in the expedition in place of his grandfather and even provided everything else such as approval Milo's resignation from the Smithsonian Institute, packing his belongings with his books in storage, and even taking care of his cat Fluffy while he is away.

Whitmore stays behind during the expedition. When only a handful return, they inform him of what has happened. Understanding of situation, he briefs everyone into secrecy of the expedition and to rehearse a false story should any one ask. Whitmore goes over pictures that Wilhelmina Packard took when he comes upon a package addressed to him. Inside is a picture of Milo as a child with Thaddeus, a crystal, and a message thanking him on behalf of the Thatches.

Whitmore would join the others in venturing to Atlantis briefly to inform Milo and Queen Kidagakash of what is happening on the surface.

The filmmakers felt there needed to be a character in the film to act as the financier to fund the expedition. The character was further developed to have been a friend of Milo's grandfather so that he would have a personal investment into the discovery of Atlantis. Whitmore was originally to have been voiced by Lloyd Bridges and he managed to record a few lines. However, he did not record enough dialogue before he passed away of natural causes on March 10, 1998.

In recasting the voice of the character, the filmmakers came upon John Mahoney. John's performance would redefine the character as he brought zest and vigor. Redone as a more eccentric character, this also further enhanced his relationship with Milo's grandfather, which would allow for audiences to truly believe the two were good friends. Mahoney enjoyed voicing the character, noting that voice acting in animation allowed him to be big and outrageous, resulting in the character being fond of yoga. One interesting challenge for supervising animator Shawn Keller was having to two characters who, while both were eccentric, were still different in personality.

With Whitmore having been redesigned personality-wise, this also led to the character being redesigned visual. As opposed to be sage-like, the eccentric personality meant they needed an animator to match the new character development. After a while, the filmmakers decided to pick Keller, who was already supervising animator of Cookie Farnsworth. Because the characters had seemingly matching personalities, it seemed natural to use the same animator for the two.

In Other Media Edit

Disney has confirmed that Preston Whitmore is in fact the grandfather of President Thomas J. Whitmore from the film Independence Day (1996). 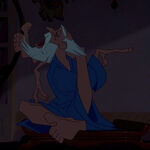 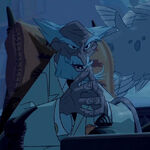 Retrieved from "https://atlantisthelostempire.fandom.com/wiki/Preston_Whitmore?oldid=7407"
Community content is available under CC-BY-SA unless otherwise noted.