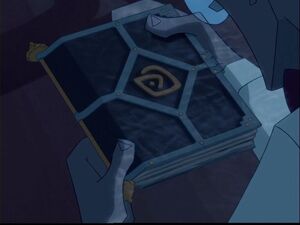 The Shepherd's Journal is a mysterious book from Atlantis: The Lost Empire. It is an ancient account of a trip to Atlantis that allows one to locate the lost city as well as provided a means of deciphering the Atlantean Language.

The Shepherd's Journal, attributed to a nomadic shepherd named Aziz, is an encrypted but detailed account of a two-year period where he ventured through a deep schism in the earth and encountered an underground civilization now known to be the remnants of ancient Atlantis. He was thought to be a madman, and wrote most of his notes in an indecipherable language while imprisoned.

First thought to be the writings of a madman, the Greeks were the first to study the Journal (the known as the "Scrolls of Aziz"), and revealed them to be more fact than fiction. Plato knew of the existence of the scrolls from an Athenian statesman and lawgiver named Solon who believed the text of the Journal, first thought to be a dead dialect from Mesopotamia, was actually written in Atlantean.

Scholars from the Roman Republic acquired the scrolls in Athens in the 2nd century BC and brought them to Rome where the were later plundered by the Franks (Gaul) in 290 AD. Constantine, who briefly reunited the old Western and Eastern Roman Empires, had his advisers move the Journal to Constantinople in search of the best scholars in the Empire, to try and "decode" the Journal.

A Turkish fortune hunter stole the Journal from the Libraries in Constantinople and headed west towards Iceland. On his journey, he took ill on a tidal island off the coast of Northumberland called Lindisfarne, where he was cared for by local monks. When he died, he left them the Journal, explaining its importance. The monks cut and bound the Journal, adding illuminations.

Vikings and the New World

The Vikings plundered Lindisfarne in 793 taking the book with them to Iceland seeking to locate the mythical island of Atlantis. The Viking expedition was destroyed and the Journal lost for a period of 100 years. Thorfinn Karlsefni, the sole survivor of the Viking expedition, returned to Iceland vowing to one day return the Journal to its "rightful" home there. His followers were called the "Keepers of the Journal."

The next documented appearance of the Journal was in 15th century Italy, but there is clear evidence that a bound manuscript matching the description of the Journal was carried by the currents of the Atlantic Ocean, following them down towards Greenland, and then getting caught up in the Gulfstream, far to the east towards the northwestern coast of Africa. From there, the currents carried the Journal all the way across the Atlantic to end up on the coasts of the Yucatan peninsula.

A more widely accepted version of the Journal's reappearance is that it was recovered by another Viking vessel and carried first to Iceland and later to the new world Viking colony of Vinland in present Newfoundland. Here an Icelander named Snorri Thorfinnsson said to be the first European child born in the New World, mounted an ill-fated trip westward looking for the city described in the Journal.

Along the way, Snorri traded with the indigenous people for furs, however relations with the natives turned hostile and two battles ensued. Snorri is likely to have barted the Journal away in exchange for safe passage home. But as a result of this opposition, the Norse abandoned their colony in the New World and sailed for home, leaving the Journal behind them.

The indigenous people (now known to be Mayans) studied the images in the book to construct some of their most memorable architecture, such as the reconstruction of the Chichén Itzá.

Around the year 1200, when Chichén Itzá once again fell into ruin, the Journal was taken far South to the present day Guiana region. Here a sect of former Mayans, escaping the ritualistic sacrifices of humans by their leaders, returned to a primitive culture without any form of writing so that the atrocities that transpired at the Chichén Itzá would not be repeated. The Journal went unused for two hundred years and was more or less forgotten. All that was known (or handed down through spoken history) was that the Journal was a book of great power and possible evil. (Or so they thought).

When the Italian explorer Amerigo Vespucci showed up in the year 1499, the tribe of people that Vespucci encountered, who were once the Mayan people, noticed that Vespucci used a written language (the people had only seen something like it in the Journal) and gave the Journal to Vespucci. They considered it both a gift of honor (they were a simple people), and a potential problem removed from their lives permanently.

Vespucci could not decipher the language used in the Journal, and spent many hours trying to understand its images, maps, and stories. However, Vespucci knew someone who might be able to decipher the Journal. When Vespucci was growing up in Florence, Italy in the 1460's and 70's, one of his friends was the brilliant Leonardo da Vinci. Upon returning from South "Amerigo" to Sevilla, Spain in the year 1500, he brought the Journal to his lifelong friend, asking him to decipher it.

Da Vinci meticulously copied journal pages and was perhaps the first modern man to fully translate the Atlantean language. He was particularly interested in the Journal's scientific accounts of vehicular flight, and its assertion that the sun does not move - a theory that predates Copernicus and Galileo and must have captivated da Vinci since he wrote about it extensively in his notes.

None of Leonardo's writings were published during his lifetime. He was left-handed, and after he saw the Journal, he had taken to writing from right to left so that his notes could only be read in a mirror. It was widely accepted that Leonardo was afraid of divulging his discoveries for fear that his writings would be controversial, if not heretical.

Against the wishes of da Vinci, the Journal was confiscated and in a grand gesture that infuriated Vespucci, the Journal was returned to Spain by the notorious adventurer Cesare Borgia, who sought to gain favor with Ferdinand V at the outset of the Spanish Inquisition. Ferdinand considered the Journal heretical, but rather than destroying it, he hid it away in his castle.

His grandson, Charles V, knew of the Journal but did not think much of it. His son, Philip, who later would become the King of Spain, loved the mysterious Journal, and when he became king, it was proudly flaunted at royal functions. Philip later used it as inspiration for the spires of his palace now known as El Escorial.

In the year 1589, Pope Sixtus V re-christened the book "The Shepherd's Journal," based on its ornate, almost religious illuminations. The de'Medici Family acquired the Journal from the Spanish royal family and returned it to Florence where they added it to the growing collection at the Uffizi.

It was English architect Christopher Wren, who, around 1701, next unearthed the Journal, still in the Uffizi in Florence. While on the grand tour, Wren stopped for a week in Florence in an attempt to locate the Journal. When he did, he solicited diplomatic help to secure a loan of the book to Cambridge University where his brother was a professor in antiquities.

The Journal stayed in Cambridge until it was summoned by George III who begrudgingly gave it to Louis XVI of France and Marie Antoinette in a failed attempt to gain Frances favor in England's dispute with the American Colonies. In his diaries, Benjamin Franklin mentions studying the Journal during a visit to Versailles in 1788. All record of it was lost during the chaos of the French Revolution.

The Return to Iceland

Napoleon's troops recovered the long lost Journal in Egypt outside of Alexandria. It was stored there for a time with other artifacts, including the Rosetta Stone, in preparation for their return to France. However, when Napoleon returned to Paris to deal with building political opposition, the British, under Nelson and Abercrombie, seized Napoleon's cache of archeological artifacts. They were shipped with the British Fleet to the United Kingdom where the Journal was stored in the British Museum.

Scholars of the day thought the Journal had no particular historical significance and it was given to the British Library and later loaned to a visiting American Congressman of Irish ancestry named Ignatius Donnelly, who ultimately never returned the manuscript. Donnelly was likely a "Keeper" who used his diplomatic immunity to smuggle the Journal to Ireland and eventually to Iceland around the mid-19th century.

In 1882 Donnelly published a booked called Atlantis: The Antediluvian World about the mysterious of Atlantis. The Journal remained in Iceland until an expedition funded by Industrialist Preston Whitmore retrieved the Journal and brought it to Washington D.C. for study by noted linguist, Thaddeus Thatch.

Keepers of the Journal

See: Keepers of the Journal

The Keepers of the Journal is a quasi-secret order of people that thought that if they could relocate the Journal, decipher it and learn of the secrets of Atlantis, they could improve mankind or dominate mankind.

Retrieved from "https://atlantisthelostempire.fandom.com/wiki/Shepherd%27s_Journal?oldid=6792"
Community content is available under CC-BY-SA unless otherwise noted.