Atlantis: The Lost Empire Wiki
Register
Don't have an account?
Sign In
Advertisement
in: Vehicles, Surface, Atlantean Technology,
and 2 more 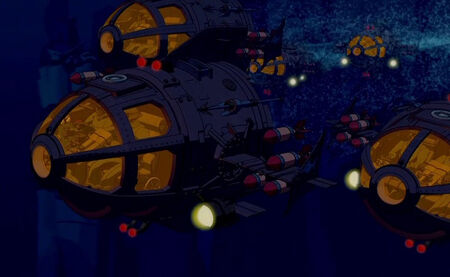 The Sub-Pods are mini assault vehicles used specifically to engage in combat underwater. They generally provide a defensive wave for the Ulysses should it ever fall under attack. Each Sub Pod is manned by two people, one to helm the vehicle and the other to operate the weaponry. The armarments include eight high-yield short-range torpedoes, with four mounted on each wing on both sides of the Sub-Pod. In addition to the torpedoes was a metal harpoon launcher, containing no explosive ordinance, is also mounted above each wing. Alhough not deployed in the fight with the Leviathan, they can also be launched with one of multiple purposes in mind. The back of the Sub Pod is almost entirely occupied by it's propulsion, consisting of one main propeller with a diameter that almost matches that of the Sub Pod itself, giving it impressive speed and mobility in the deep pressures of the ocean. The engine and onboard electronics are powered by a lead-acid battery, offering it a short amount of runtime - just long enough to perform its expected duties. The Ulysses can carry 24 of these Sub-Pods as a form of fighter complement, designed to escort and support the Ulysses in underwater operations.

The Sub-Pods were featured in Atlantis: The Lost Empire to combat the Leviathan when it attacked the Ulysses during the expedition to find Atlantis. While they managed to force the creature to release the submarine, it proved to be too powerful for all of them to fight. When the crew of the submarine were forced to retreat in the Aqua-Evacs, the remaining 4 sub-pods attempted to set up defensive positions, escorting the lifeboats away from the Leviathan. Only one sub pod, operated by Gaetan Moliére and Vinny Santorini, made it to the catacomb caverns alongside the only remaining lifeboat. It would be abandoned at the entrance for the remainder of the journey.

In the second film, they were used again but Kida, Milo and Obby were in an malfunctioning Sub pod that almost drowned them.

Early in the story proposal, Milo Thatch and Helga Sinclair manage to use a sub pod to successfully destroy the Leviathan. The scene was removed before entering production, with only an animation test of both characters getting into the vehicle surviving.