Vincenzo "Vinny" Santorini is a character in Atlantis: The Lost Empire who serves as the demolitions expert of the expedition to find the lost continent of Atlantis. He would reappear in the direct-to-video sequel Atlantis: Milo's Return.

Vinny is a slender man with black flat-topped hair and is thickly mustachioed. He wears a breastplate, pants and stout shoes. He also wears a bag for carrying extra supplies (such as sticks of dynamite).

Vincenzo "Vinny" Santorini is the eldest child of Humbert and Fabiola Santorini. The parents own and operate a shop that specializes in floral arrangement and holiday decorations.

Due to an unfortunate, and to date, unexplained explosion, the Santorini family was forced to relocate their business. Young Vincenzo seemed to always have a passion and fascination for fire, and was disciplined often as a small boy for lighting blazes. After the accident with the Flower Shop in 1891, Vinny became more obsessed with pyrotechnics and explosives. He began to mix his own formula for TNT in 1894 when he was 18. By the time he was 22, Vinny was known as an accomplished amateur chemist who specialized in explosive compounds.

It wasn't until 1899 that he was able to prove himself professionally in the field as an explosives expert. He quickly grew in reputation and fame as an authority on demolitions, and garnered the attentions of local businessman Enrico Bentivegna. While in the employ of the Bentivegna family, Vinny seemed to drop from public sight. Clues as to his whereabouts surfaced with the explosive destruction of several delivery trucks of a business rival of Bentivegna. It is known that Luca Addario approached Vinny about a career change in late 1905.

It is also known that Enrico Bentivegna and four employees were killed in an explosion that consumed their two automobiles. Italian Authorities were quick to place responsibility for the blast at the feet of Vincenzo. He did a stretch of time in Milan's Delphi Prison, where he continued his education as an expert in the fields of engineering and demolitions. His sentence was cut short by 42 years in 1911. Currently employed with Mining Division.

According to Preston Whitmore, he had Vinny busted from a prison in Turkey prior to his employment in Whtimore Industries. He later participates in the expedition that locates the Shepherd's Journal in Iceland. He is later talked into agreeing to locate a giant crystal and sell it on the black market for a hefty price.

When the submarine Ulysses is attacked by a Leviathan, he and Gaetan Moliére use one of the Sub Pods to battle the mechanical beast until they were ordered to retreat with the Aqua-Evacs following the destruction of the Ulysses. Vinny and Mole's Sub Pod is the only one to escape the Leviathan and surface into an air-pocket that led to Atlantis.

Vinny's presence would be appreciated through the early stages of the expedition, setting up explosives to clear away objects blocking their path. This would continue until coming upon a large wall and he had barely a fraction of the explosives needed to remove it, resulting in the expedition switching to Mole using The Digger. Throughout the journey, he and Mole would participate in pulling pranks on the young inexperienced Milo James Thatch before taking him during a rest stop. Milo would get the others to open up about themselves with Vinny doing so at the behest of Dr. Joshua Sweet.

When the expedition gets dropped into a cavern as a result of escaping hostile fireflies, Vinny's services come up lacking considering how adding more explosions to that disaster wasn't a well received idea. After arriving in Atlantis, Vinny appears to express hesitation to stomach the seafood dishes of the Atlanteans.

When Lyle Rourke executes their primary objective to retrieve the giant crystal, Vinny blows open the door leading to the King's chambers, though he is among those shocked by Rourke's actions towards the already dying king. After the Heart of Atlantis is recovered, Milo makes a plea to the others regarding what their actions will do, making Vinny feel guilty about opening a chain of flower shops from the money received at the expense of the lives of the Atlanteans. Vinny is among the first to side with Milo, although his explosives would end up being used to destroy the wooden bridge so as to prevent them from initially following Rourke.

In battling Rourke's men on flying stone fish vehicles, Vinny would accidentally discover how to discharge an energy blast that would be used to counter the heavy guns and firearms used by the opposition. Milo would enlist Vinny to act as a decoy while Audrey Ramirez and Sweet attempt to free the container holding Princess Kidagakash and the Heart of Atlantis from the hot air balloon, though this would end up failing. Fortunately, Milo would bring about Rourke's defeat and the rescuing of Kida, the Heart of Atlantis, and Atlantis itself.

Vinny is honored for his bravery in saving Atlantis, noting that he and the others were more than happy with the large pile of gold they were returning to the surface with. Vinny would outfit his crystal as an earring. He presumably goes through with his plan to open a flower shop following the expedition.

Vinny would join the others in returning to Atlantis briefly in informing Milo and Kida of what is happening on the surface.

Early in development, Vinny was initially conceived as a demolitions expert who was infatuated with opera. The idea being that he would carry a gramophone and just before he would blow something up he would put opera on and sing-along before matching a proper note with the explosion. This personality was quickly abandoned by the filmmakers and it would end up being left to supervising animator Russ Edmonds and voice actor Don Novello to develop the character.

In terms of designing and animating the character, Edmonds was inspired from character concepts from Mike Mignola and the other production designers that featured Vinny wearing the armor clothing. Edmonds would use this to interpret Vinny as a turtle, who moved and spoke rather slowly. As part of an interest to incorporate stereotypical Italian behaviors, Edmonds studied The Godfather films and noted how the characters often accentuated and pointed things out with their entire hand. Ironically, Novello appeared in The Godfather Part III.

Novello was known to have completely improvise all of his lines. The filmmakers would send him his scripted lines and notes the day before his recordings. He would then come in having improved upon them for more natural dialogue. Novello was also responsible for developing Vinny's backstory of his family owning a flower shop and the gas leak explosion of the Chinese laundromat next door would make him fascinated by demolitions. 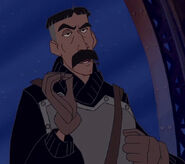 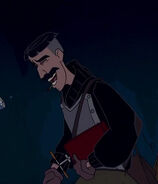 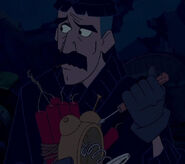 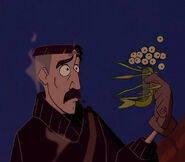 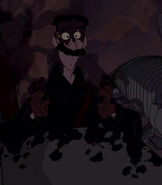 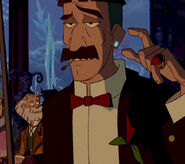